“I’ve never really liked the breakfast sausages I’ve had in Ireland,” Sara says to Jerry, our butcher, “but I love yours.”

“I suspect that’s because I put meat in mine,” replies Jerry.  He turns to me, “Will ye be at Trevis’ launch on Sunday? It’s a grand book altogether that he has.”  A butcher who puts meat in his sausages and reads books?  We bond immediately.  “At O’Flaherty’s? We will,” I say.

During my brief trip to our town in January to set up our house, I’d walked into the butcher shop down the lane just off Main Street and announced “I’m looking for the best butcher in Dingle.”

“Well, now, ye’ve found him,” he retorted.  It helps that he has a distinguished last name and that he sources all of his beef and lamb on the Dingle Peninsula and that he supplies most of the good restaurants in town.  But it is the conversation with him while he cuts your order to your specifications that draws us in.  He gets our custom.

John Street becomes Main Street becomes Upper Main becomes Goat Street in Dingle town.  Green Street and Dykegate Lane and The Mall run down the hill to the Strand and the Holy Ground at the foot of the town near the harbor.

In a town with a scant two thousand people there are two bookstores, multiple art galleries, and fine restaurants.  And pubs.  Lots of pubs.  As visitors from the Blasket Islands used to say, “A good night was had for several days.”

There are artists and sculptors, writers and musicians, poets and poseurs.  Shopkeepers and cheese, veg, and fish mongers.  And of course butchers, bakers, and yes, a candle stick maker.  We visit and learn from all of them.  And talk. 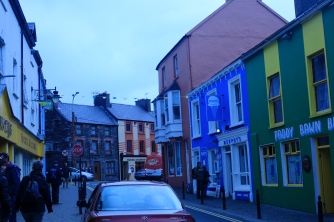 Two sweet ladies run a corner shop where we squeeze sideways down the aisles crammed with games and and toys and paper and biros and bubble wrap.  They are holding a lotto for a woman in town who has been struck by “the cancer.”  First prize is a “heifer in calf.”  As I hand her my euro, I worry aloud that I might win.  “Don’t worry, I’m sure someone will relieve ye of the prize at no cost,” she assures me.  She knows we are Yanks and asks us if we’ve read The Hillbilly Elegy, one of the most important books of the past year.  Embarrassed, we tell here we have not.  “Ye should,” she says, “it helps explain how that eejit was elected.”  We pick up a copy at the bookstore down the street.

I’m talking to our fruit and veg man about the film festival in March and the Dingle races in August.  As always the talk turns to the weather.  It is a fine day in town and not a cloud in the sky, a true rarity here.  “Do ye have days like this in Santa Fe?” he asks.  “About three hundred and twenty a year,” I answer.  “Well,” he muses, “I reckon we balance that ledger.”

I think every citizen of every town in the world claims that their town has the best ice cream.  I’m sorry to tell all of the Handel’s and Graeter’s fans out there, but Murphy’s in Dingle takes the crown.  We stop in for a cup and get to talking with the manager.  “I suspect you’ll see us often now that we’re living in Mullenaglemig,” we tell her.  “Don’t I live in the first house in front after the turn?” she exclaims.  Just then an older man walks in.  She says, “This is my Da.  He lives in the house behind me.”  I introduce myself by saying, “We’re your new neighbors.  We live in the house in the woods where Grainne used to live.”  He says, “Are ye the Yanks who walk, then?”  We are indeed.

A fews days later, Sara has a minor observation to make to Jerry, our butcher.  “The chops we had this week didn’t taste the same as the chops the week before,” she tells him. 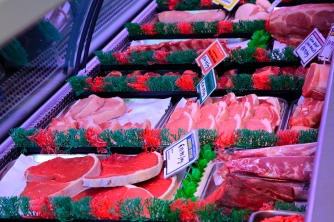 We live closer to things here, whether it’s the meat or the veg or the eggs that are so fresh that you almost know the name of the hen that laid them. And we’re learning to live closer to the people.  There’s an anecdote near the end of the book Jerry and I were talking about.  Trevis is Trevis Gleason, another Yank in town.  His book is called Chef  Interrupted, which I highly recommend. Trevis was an accomplished chef whose career was cut short by multiple sclerosis.  He came to Dingle for three months years ago to sort out his life.  Towards the end of his stay, he laments to the bar man in his local that he has had so many visitors from the States that he hasn’t gotten to know many of the people in town.  “Don’t worry,” the bar man tells him, “they all know you.”

Aren’t we all different animals then, just getting to know each other?  And so it goes with us, one conversation at a time.

5 thoughts on “Conversations in Town”