“Make hay while the sun shines” the old saying advises.

The sun has been shining off and on for a few days now and the farmers up and down our lane are mowing their fields. All day, from eight in the morning until nine in the evening, mighty John Deere tractors with rear tires that are a good foot taller than me and broad enough to brush the hedgerows on both sides of the road rumble back and forth. They pull wagonloads of hay to a processing site and then return to the fields, hungry for more.

It is satisfying to be in tune with the seasons of rural Ireland. But it interferes with our walks.

Most days we walk the lanes in our neighborhood. We’ll look out the window in the morning, judging the weather. If it’s fine we might say, “How about the Long Walk?” up past the Young Farmer through Cathair Bó Sine and back down the Ventry Road. Or, “Let’s go over to Burnham” and walk around the old Ventry estate and down along the harbour’s stony shore.

If the weather looks threatening, one of us might suggest, “Just down to the end of the lane?” although this walk does require carrying Lucy while we pass the farmer’s house where the mean sheepdog lives. Once bitten, twice shy.

But during haying season these walks can be hazardous. We have to throw ourselves, and Lucy, against the ditch every few minutes as the tractors roll by. I should explain that a “ditch” in Ireland is not the same as a “ditch” in the states. Here a ditch is an earthen or stone embankment often covered by vegetation that lines the roads and divides the fields. What we would call a “ditch” in the U.S. is called a “drain” here. Hugging a ditch muttering frantic Hail Marys while a beast of a machine rattles by at 40 kph is not relaxing.

“We have to run out to the pottery today so maybe we can walk around there,” Sara suggests. So off we go to the Louis Mulcahy Pottery out on the far end of the peninsula.

We need a special gift for a happy occasion back in Ohio, and the Mulcahy Pottery never disappoints. His pieces perfectly reflect the Dingle landscape. The colors, shades of brown and green and blue, come from the fields and the sea that surround the pottery. The decorations, birds and fish and flowers, are the fruit of the land and sea. We find the perfect blue bowl for our gift and send it off.

As we leave the pottery I say, “Let’s turn down this road. I think the Dingle Way might go through here.” The Dingle Way is a hiking route that goes all around the circumference of the peninsula. Part of it passes within 100 meters of our house.

We have been driving around the Dingle Peninsula for over thirty years following the same route: through Ventry, fording the stream at Gleann Fan, around Slea Head to gaze at the Blasket Islands, then weaving through Dunquin and stopping at Ceann Stratha to stretch our legs and admire the view. And every time we do this I say, “Look at that beautiful little beach down there. I wonder how you get to it?” And then we drive on, sad creatures of habit.

The road I have turned down today answers my question.

Clogher Strand is magnificent. Small, perhaps 250 meters across, but perfectly formed. Crescent shaped with arms on either side that reach out to enclose the crashing waves. We let Lucy off her lead to run free. 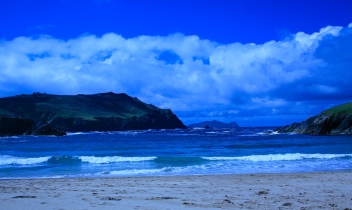 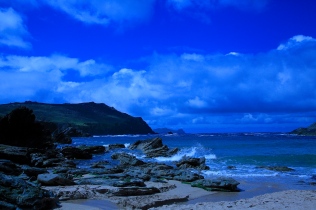 She runs in wide circles in the sand, stopping occasionally to see if the people resting on blankets enjoying the sun and the surf might have a spare treat or pausing to drink from the stream that runs down from the hill behind the beach. I look up at the headland above us and spot a few tiny people peering down at the beautiful beach. They then get back in their car to continue their tour because they have somewhere to be. It took us thirty years to find what they are missing.

Just above the strand there is a small marker for the Dingle Way. We squeeze through the stile with Lucy and follow the trail that climbs the hill and hugs the cliffs of An Drom. The Atlantic crashes on the rocks below us, sending sea spray high into the air. Recently shorn sheep eye us warily. 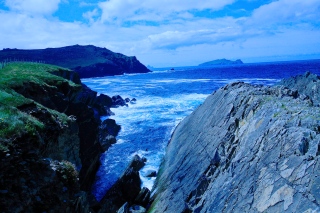 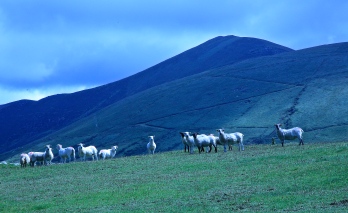 I remember what Jerry, our butcher, had told me one day. “West Kerry lamb doesn’t need to be salted,” he said, “since they eat the salt from the sea with the grass.”

We reach the top of the headland. To the north, Ceann Sibéal, Sybil Head, an immense promontory with towering cliffs, fights its eternal battle with the Atlantic. To the south, Inis Tuaisceart, The Sleeping Giant, the most northern of the Blasket islands, rests peacefully on the horizon, the surrounding ocean the color of the blue Mulcahy bowl we have just purchased. The only sounds are the cries of gulls riding drafts of air and sheep tearing the salty grass. After a few quiet moments, we all turn and walk down the hill to our car. 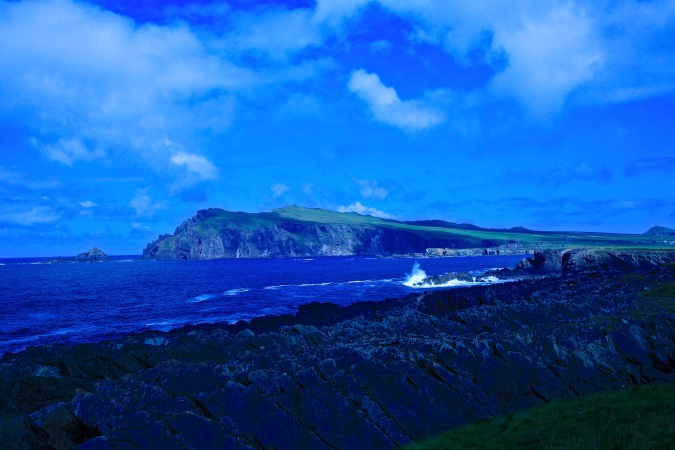 Back home we sit in our lounge and listen to the tractors thunder up and down the lane, thinking it’s good to take a new road and to send a bit of the sea back to Ohio.