“Every stone,” the old saying goes, “knows its place.”

The stone I am wrestling with, all twenty-five or thirty pounds of it, definitely knows its place, and it is not the spot I have chosen for it.  I turn it 180 degrees, then 360.  Then back again. I flip it over and try once more, edging it this way and that.  But the stone knows it doesn’t belong, so I toss it aside and look over the thirty or forty stones at my feet for a more willing replacement.

The raised garden beds around our house were edged by old timbers, which after ten years of exposure to the lovely Irish weather, have rotted away.  They no longer hold the soil in place.  Their only purpose now is to provide a home for ants and, I fear, termites.  They have to go.

Stone walls are everywhere in Ireland.  Every field is surrounded by strong broad walls. They climb the highest mountains, separating the sheep from the cattle in their pastures.  The humblest homes and the most regal estates boast a stone entry way. The major motorways and the narrowest country lanes are lined with stone walls.  Stone is sturdy, substantial and, I’m almost certain, does not rot.

Styles vary throughout Ireland.  The midlands have tailored walls, perfectly fitted, built by skilled stonemasons. The country farms have more rustic walls built by farmers clearing their fields and simply piling stones around the perimeter.  In Clare, the stones are flatter and fit together easily.  In Connemara, the stones are rounder and seem to defy gravity as they balance on top of each other.  Mayo farmers set their stones on edge.  And on the Aran Islands there are gaps between the stone to allow the wild Atlantic winds to pass through.  I decide my style will be “whatever fits”.

“And where are you going to get the stone?” Sara asks.

“I’ll ask the Young Farmer down the road,” I reply.  “He seems to know where to get everything.”

Thomas, the Young Farmer, is delivering a load of firewood for our stove the next day.

“I’d like to build a wall around those beds,” I say to him when he pulls in with his tractor.  “Do you know where I can get some stone?”

“I reckon I’ve as much stone as ye would ever want,” he tells me.  “Do ye know where the gate to the woods is?”

“There is a stone pile just inside the gate.  I’ll drop a box beside it and ye can fill it up with all the stone ye need.  Text me when it’s filled and I’ll bring it down to ye.”

I spend a good two hours at the pile evaluating stones and carrying them to the heavy steel box, about eight feet wide and three feet high, open on one side.  Some I can easily toss into the box.  Some I hug against my body and waddle over to drop them in.  And a few, the anchor stones that weigh nearly one hundred pounds, I roll end over end until I reach the box and tip them in with one last mighty heave.

As a reward, and to loosen my sore muscles, I walk through the woods on the way home, listening to the music of the burbling stream and the wind rustling through the pines. I pick up a few fallen tree limbs that show the potential to become good walking sticks.

A man of his word, Thomas drops off the box with his tractor later in the evening.  Tomorrow I’ll go to work.

That night I finish a wonderful book, In the Wake of St Brendan, From Dingle to Iceland, by Danny Sheehy.  Danny was a local poet, boat builder, and seafarer, who died tragically last year.  One quote stood out: “There is no wise man without fault, except the stonemason who always blames the stone.”

The next morning I’m working in the rain and blaming lots of stones.  I stand with stones scattered around me for fifteen feet on either side, looking from the wall to the stones, evaluating each to see if it can find its place.  Slowly, working from right to left, the wall begins to take shape.  I wrestle with the heavy anchor stones, manhandling them into position.  Next to them I squeeze likely looking suspects, filling in the gaps with small wedge stones.  Always, it seems, the perfect stone is the one furthest to the left of me, unless of course it is the one furthest to the right.  Back and forth I move and the stones begin to resemble a wall.

My shoulders and arms ache; my back is screaming for mercy.  My legs protest that they may never straighten out again.  I work around the corners and down the other side of the bed.  And then, just as the rain is letting up, I fit the last stone in its preferred place. I’ve built a wall.

In a few days, I can work the compost into the soil and get the vegetables in the ground.

I hobble into the house and say to Sara, “Now I know why my grandfather emigrated.”

That evening, the Young Farmer, comes by to pick up the box.  His wide-eyed five-year-old son is in the cab of the tractor with him, excited to ride with Da.

“I promised him a ride into town after this.  Isn’t that the grandest thing in the world to him?”

Thomas climbs down from the cab and eyes the wall for a long moment.

“Fair play to you, Jim,” he says.  “I’d say you have the makings of a stonemason in you.  Sure, that wall will be here after we both are dead and gone.”

And that is the best compliment I could ever hope for.  Grandpa would be proud. 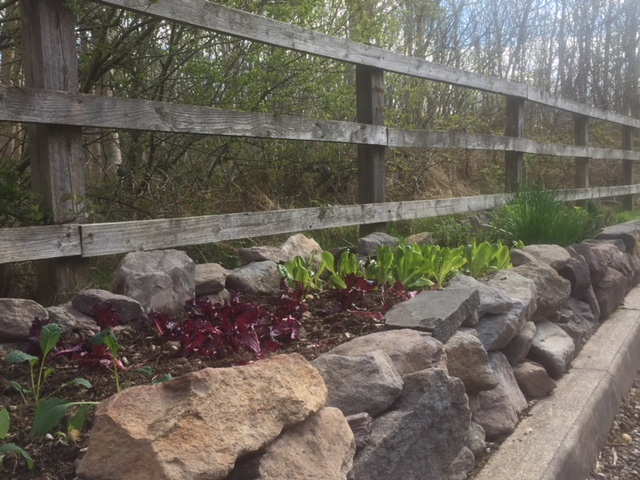